In the name of Allah, the Compassionate, the Merciful

Statement by the Jordan Academy of Arabic

To the people of this noble country,

To all Arab and Islamic peoples everywhere,

To our colleagues in sister academies of Arabic and in all other academic, non-governmental, and national institutions rising today against crimes perpetrated by the occupying forces in Palestine, revealing racist mentality, disregard of international institutions and human rights, the latest of which being the so-called Nation-State Law, which has limited the right of self-determination to the Jewish people and struck out the Arabic Language as an official in occupied Palestine, making it a marginal language although it represents the very soul of the Arab people, in the forefront of which is the sister nation in Palestine, now struggling for freedom.

What is happening now in Jerusalem and in al-Aqsa Mosque, and the attempt currently undertaken by the arrogant powers to penetrate into our remaining Islamic and Christian holy places should alert us and all freedom fighters everywhere to the fact that Jerusalem is in danger and that the Palestinian presence there is threatened. This means that the dignity of the Palestinians and Arabs will suffer from new wounds to be inflicted in the near future.

The Jordan Academy of Arabic calls on all conscientious people everywhere to support the Palestinians in their struggle to keep their homeland and their language, to exercise their right of self-determination. The Academy calls on all Arab and Islamic states, all international institutions and the United Nations, and all Arab universities to shoulder their responsibility, to stand with us against this Zionist colonialist-settler policy, whose very presence in Palestine is in defiance of history and the right therein that has been ours for thousands of years.

The Holy Qur’an, which was revealed in pellucid Arabic, has taught us that right will in the end have the upper hand. Faith was the banner under which the leaders of the Arabs fought in Palestine. The Qur’an, which elevated our souls from the Holy Mosque in Mecca to the Aqsa Mosque in Jerusalem and thence to heaven, taught us not to betray God, the Prophet, or our sacred mission. Is there any mission greater than Palestine and Arabic? Is there anything greater than the Aqsa Mosque, which is now besieged by the occupying Zionist forces? 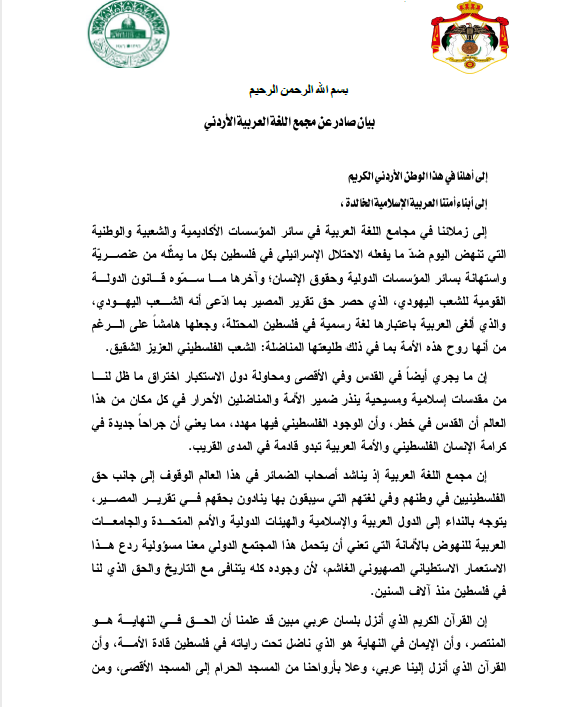 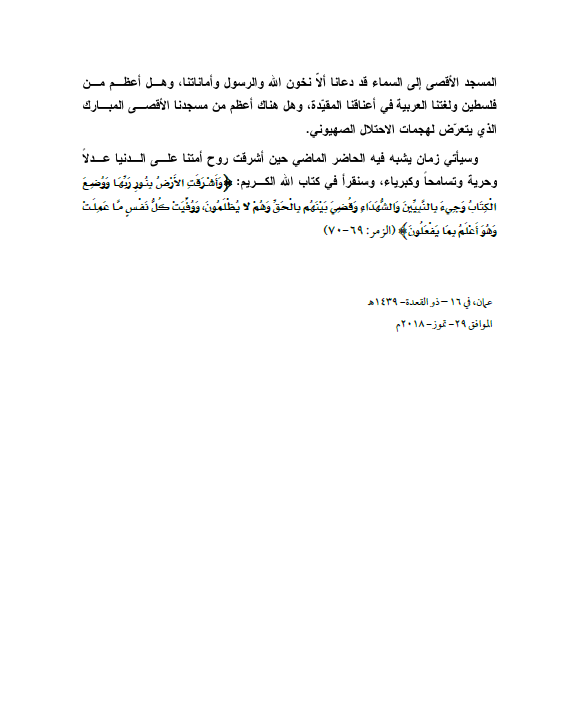